‘These people are about to act out for you the story of Antigone.’

I am so looking forward to rediscovering this play in the Theatrecorp production in November, using Chekhov Technque as the bedrock of the rehearsal process. When I first came across Anouilh’s Antigone, or more accurately , Galantiere’s translation of this 1940’s play, I was 15. At that age, I competed in more than my fair share of drama festivals, and must have seen more versions of Antigone’s confrontation with her sister Ismene than a person could stand, to the point that I would sigh when I saw it in the programme…and sit back to watch yet another young aspiring actress trying to squeeze terror out of herself .This scene and the one in Ring Around The Moon by the same author, where the two young women bitch and have a physical fight, were very popular choices for teenage girls and their front room drama teachers around this time! 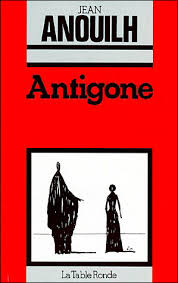 Despite this, I nonetheless have remained fascinated by Antigone. Of course the theme is attractive for artists and young people. A heroine refuses stubbornly and determinedly not to compromise, preferring to die rather than tread the path of a life of privilege, ease and pragmatic survival. It is said that the play focuses as much on the theme of impending adulthood, and accepting the world as it is (or not) as it does on politics. Sometimes I wonder whether they are not the same thing.

Many many writers have written versions of Antigone’s story including Brecht, whose version I suppose I ought to sympathise with more, but I don’t . What is so appealing about Anouilh’s for me is that whilst I completely sympathise with Antigone’s action to bury her brother and defy the King, the arguments both for and against Antigone’s action are aired passionately and equally by Antigone and Creon in the fantastic central scene in the play, and that despite the fact that Antigone’s feelings seem to be condoned by the playwright, her motives are seriously challenged.
And this, I feel is the challenge of the play. As people in the world, we justify everything we do and don’t do, and our justifications have consequences, often severe ones, even for people we never meet. I am thinking primarily of our consumer choices here.

The disturbing exploration of Antigone’s decision suggests that we have to choose our path, and to live with that choice, whatever it is. This is uncomfortable. Antigone’s view tells us that Creon, Ismene and the rest will never be happy. They will compromise and live life at a different level to her, a level laced with compromise , with less real dignity and truth.

Of course this muddying of Antigone’s motive could have been as a result of the fact that the play ran for 500 performances in Nazi occupied France . The fact that Anouilh was ultimately suspected of sympathising with the occupiers, and the fact that Creon is presented sympathetically though not triumphantly, does make me feel a bit uncomfortable. I am thinking this setting of 1944 might be extremely pertinent in some ways given the rise of the Far Right in Europe now, most particularly in France. But then, it depends. The tone of the play could be seen as ultimately defeatist against the oppressor, and that is the last thing I would want an audience to feel.

Two other things influenced me in the choice of this play. One of the great Chekhov teachers and I am pleased to say a friend, Ted Pugh, of the Michael Chekhov Association told me of a reading they did of the play, and reenthused me as to what a wonderful and challenging play it was. The result was that I used the play for a series of Chekhov workshops last autumn. During a powerful presentation of a short scene towards the end of a class on Psychological Gesture, two actors were working on the very scene I mentioned at the beginning of this piece where the two sisters confront each other about whether they can bury their brother . One of the actors, tears in her eyes quietly said to the other, ‘but Antigone, I don’t want to die….’ I was incredibly moved. it made me realise how much people want to live, and what they are prepared to do to hang on to it.

I am looking forward to starting it in September! Check out the Theatrecorp link. http://www.theatrecorp.org