I have always believed that the theatre should illuminate something and attempt to affect the views and feelings of those who see it and are involved with it. Alien Nation was written in 2002 and was partly a response to the fact that someone told me I should stop writing plays which were critical about Irish society. These days this criticism would be laughable. It was first performed in the Cuirt International Festival by Galway Youth Theatre. 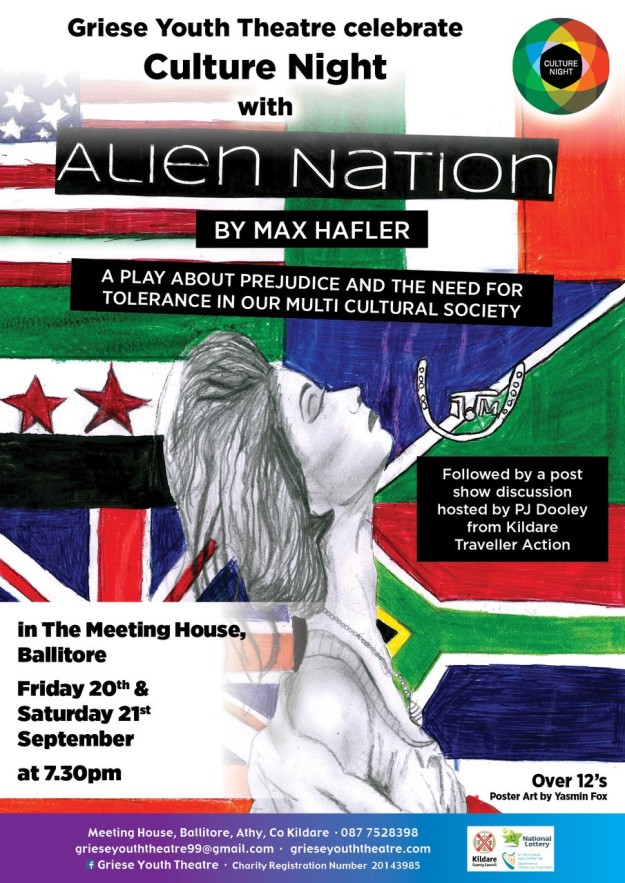 Alien Nation is a 40 minute youth theatre play about racism and sadly is even more pertinent today than it was then. As someone fairly new to Ireland at the time, I noticed that a lot of the racism seemed more veiled than the UK but was most definitely present, and it wasn’t always veiled. Whîlst I was writing the play a Chinese restaurant was attacked and the owner murðered in Limerick. A Czech friend of mine was run down in the country and the Gardai refused to press charges even though they suspected the driver who had done it. A woman protested against a play about refugees in the Galway Arts Festival.

It might be hard to remember but this was the early period of MTV videos, though, as yet, young people did not have mobile phones (an extraordinary thought). I wanted to write something which had the music video feel and devised lots of rhythm work and choreography with the group who originally did it with cross rhythms and interesting movement work. Juxtaposed with that were high octane short scenes where you could be very specific with the young actors as to what might be going on within the scenes. Many people asked whether it was devised, which I took as a great compliment, because they said it sounded so real.

Over the years the play has been used in schools and youth theatres and was published by Youth Theatre Ireland.

One thing the play says very clearly is that when people feel threatened they reach back towards an ideal time that never was as a kind of security blanket. As we get older there is a danger of doing this more, as the ‘what-is- behind’ assumes a greater importance as there is less of ‘what-is-ahead’. If we truly examine those past times they are often not as we remember them; we tend to brush over the cruelties and injustices we dismissed as normal, which were part of everyday life. This looking back to a rosier past is the most potent weapon of Fascism because it appears to be a truth, but it really isn’t. This and of course being as divisive as they can, stirring up hate and suspicion is all par for the course for those forces who yearn for chaos so they can bring a right-wing agenda back to the fore. In these recent times, with Trump,Putin, Johnson, Salvini, Bolsonaro, all the lesser beings who support these people for their own self-serving ends  and those who feel their world is falling apart who need these dictators to make everything ok (even when they won’t) we need to always be cautious. These leaders oil the prejudice which only builds confusion and hatred.

As they sing in the end of the play “Everything changes and nothing stays the same.”

I am delighted that Griese Youth Theatre has chosen to do this play for Culture Night and especially that they are then having a discussion about the subject afterwards.