Political theatre can easily be didactic . It has frequently been lambasted for being artistically worthless. I suppose a criticism might be that it often ploughs a thin furrow; that it expresses one point of view; that it has an agenda –  a spurious argument when every tv show, play or movie has an agenda of some description (even if it is to stop you thinking about anything at all). Of course political theatre can satirise, fight against and keep resistance alive. Michael Chekhov believed that as artists we had to be responsible and had to make our art useful to our audiences. He lived during a terribly traumatic world period (1896 -1955) and after fame in Russia escaped with his life after falling foul of the authorities because of his artistic approach. He  travelled through various theatres in Europe seeking a foothold before he was offered the chance to run his school in Dartington. Even then the school was not able to continue because of World War Two so he started it again in Ridgefield Connecticut before moving to Hollywood, starting a studio and also working as an actor.

What might be the conditions for fascism and what is the atmosphere it thrives in? Why is it so important to find this when we approach plays like Fear and Misery in the Third Reich, to truly be able to build a connection between that time and ours? Because if we cannot build that connection then we are, as artists, not doing much. We are not making people think or consider. We are making them feel worthy or amused. 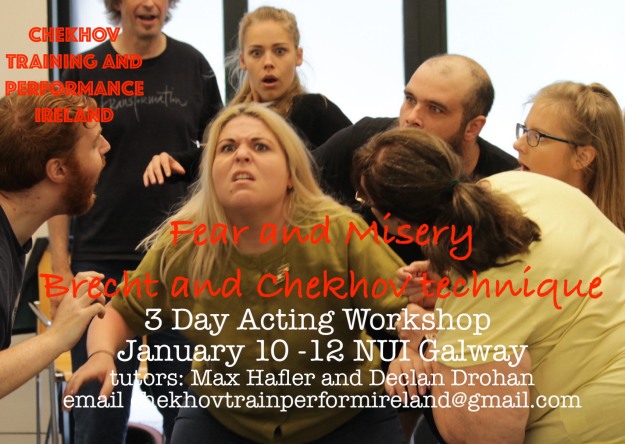 If I look at what is happening now in the world, (Boris Johnson got his big majority a few days ago) I get a sense of negativity and gloom but primarily, impending chaos (largely considering the climate emergency and the apparent refusal to make meaningful change). It seems to have created circumstances ripe for dictatorship. In addition,  there needs to be a sufficient body of unhappy people who can be utilised as long as the authorities press the right buttons. In such times it is easy to manipulate and enrage a people who see themselves under threat.  Fear and Division seem to be effective tools of rulers and that is a place we might consider starting from in our workshop. What is it actually like to live with fear and division all the time?  How does that manifest in the actions of characters?  By getting in touch with some of these archetypal forces through atmosphere, polarities and archetypes, we can immediately enrich both our acting and the message of the plays. We can thicken it and make it complex without simply sounding angry yet still empower our message to encourage change. It seems to me besides scape-goating (the nation’s problems are always someone else’s fault) another atmosphere that is tapped into is the Potency of the Idealised Past; it is the nurturing of a longing for a perfect past that never really existed; it encourages the view that if only the politicians and their people could turn back the clock there would be a rosy heaven in the country. So the problems, forces and tools used to create a dictatorial Fascist state are dense and complex…. A state turning fascist is like a whole people falling into a thick swamp. Ironically the more grotesque a state becomes it is hard to laugh good-humouredly anymore. There is a humour but it is the cold raucous icy humour which is close to tears.

As Chekhov said,”We have to open our own eyes in order that we may open the eyes of our audience. ….. Because of our artistic work our audience will awaken and understand these things anew. This is one of the theatre’s missions.” Lessons For Teachers 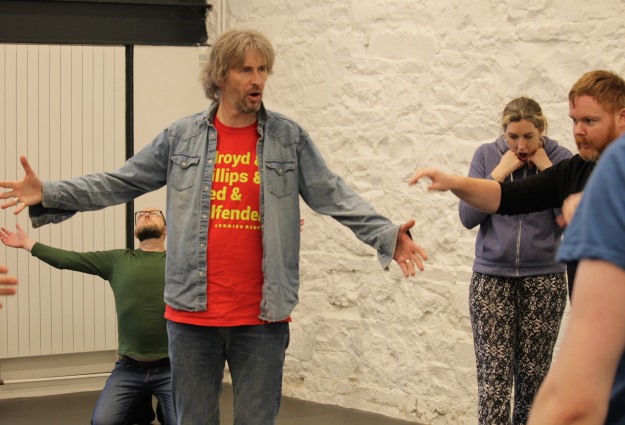 Declan working with the group earlier this year

This fascinating  exploration of Brecht and Chekhov Technique with practise and application of the work takes place at NUI Galway between January 10 – 12th for three full days . The leaders are Max Hafler and guest tutor Declan Drohan . The cost is €150. Email chekhovtrainperformireland@gmail.com to book your place. There are still a few places available.