“I mean, how could I possibly play Medea from my own life experience?”  said one of my wonderful teachers, as I sat completely overwhelmed after one of the early workshops I attended in the Michael Chekhov Technique, “There has got to be a way of finding her truth through Imagination and the Body”. Then she smiled and was gone for her lunch.

One of the most powerful ways into the work on character is through The Archetype and Archetypal energy. This expression of the Archetype in acting class often gives rise to people assuming that an archetype is a stereotype; in other words something superficial: but it isn’t.  Consider the archetype as an energy, rather than an obvious cartoon character and you are on the right track. That way you can really explore the profundity of what the Archetype can give you.

Ciara Brady and William Loughnane as Titania and Oberon

In the next Chekhov Weekend here, (June 21-23) we will be seeking some connection to this archetypal energy, and then using it to build our character, exploring archetypes using A Midsummer Night’s Dream.

On the surface, there are a lot of obvious archetypes in this play. Kings, Queens, Fairies, Clowns, Actors, Lovers, Fathers, Servants and exploring these archetypes is useful for us because we often have no experience of many of these qualities in our modern life.

I remember spending time, when I was directing The Duchess of Malfi,  exploring with the actors what it was like to be The Servant, not just in a realistic sense but finding this profound archetypal energy to understand  the psychology of those characters who were servants. 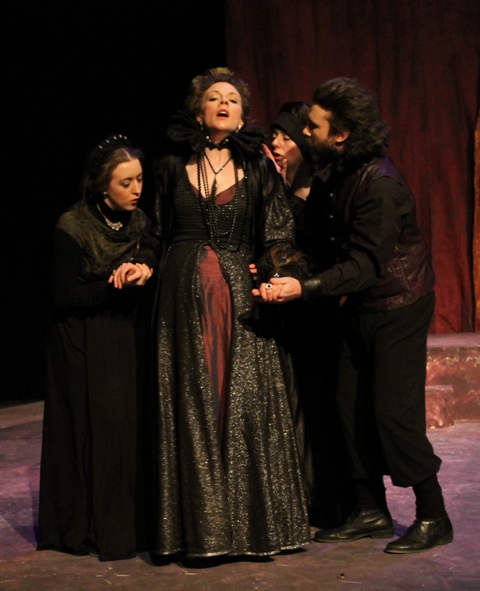 But there are several layers to this “way into” the character, and one thing we need to consider is  what exactly the charácter does and whether this could shed any more profound light on the archetype which drives the character.

Puck, for instance, could have at his core a number of possible archetypes: the obvious ones , goblin, sprite, etc  are all helpful but to some extent superficial. But what does he do? He is a servant, a magical one. He makes mischief. He makes mistakes. Perhaps he is a rebel? A child?

But what about the orphan as his archetype? Robin Goodfellow is sometimes considered a kind of half-sprite, neither a fairy, nor a human. If you took this archetype orphan  or even that of outsider think how different those two performances might be.

And of course it is important to remember that these archetypes are not ‘the character’ in total but they are a fundamental component of the character and its energy. They are a driving force . They can even be a core.

Let’s take Helena. Spoiled brat might be seen as a helpful archetype  but the name spoiled brat creates a strong value judgement within it and as soon as you make a conscious critical judgement you create something stereotypical and therefore not that helpful in creating something powerful and true.

There are still two places on this weekend course in Galway. Working with Archetypes. June 21-23, email chekhovtrainperformireland@gmail.com to book your place.