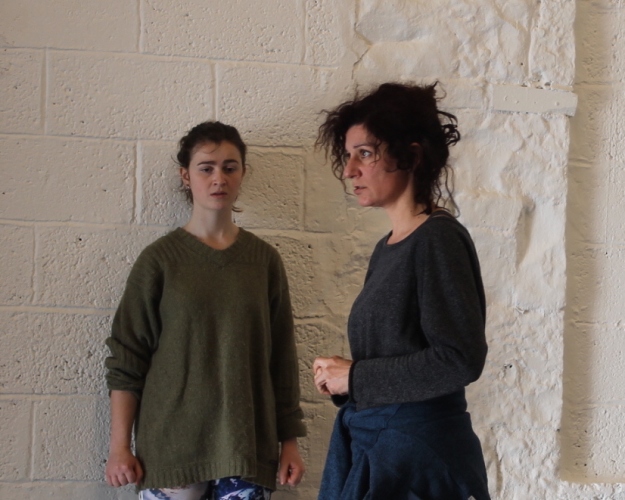 So for the final weekend in the series of Michael Chekhov workshops, we embarked on an exploration of silence, of pauses, in a play. We began with the whole question of ‘What is a pause?’ And how do we find that ‘what’ in our bodies, so as to better understand it? As Chekhov said, a pause is a place of great inner movement even when the character is physically still. Often when we watch a play, actors pause because it says so in the script, or because the director has asked them to, or sometimes one of the actors feels a pause is right and the other doesn’t. The unwilling actor tries to look meaningful when the actor who wants to take the pause does it. Often the pause has little or nothing to do with the character or situation but has more to do with the actor’s ego. When this happens the unwilling actor struggles to support the other but the pause is ultimately empty and meaningless. These are ‘poses’ rather than pauses. A pause has to be organic.

Within this apparent stillness of the pause there can be an entire universe of experience; of battle; of understanding; of love;of defeat.

The only time there is no movement of energy through and within us is when we are dead. It’s inner movement. Very violent sometimes. It has direction and power. There is usually a change of psychological direction and quality after a pause, even if it is very subtle. So pauses are less about stillness than change. A useful thing to consider is when you get bad news. The energy comes into you and plunges down and back. When you get good news it usually goes up .

A pause is to do with the invisible, with energy. Michael Chekhov says it is often to do with something that is going to happen or a response to something that has happened. It has an impact. We do know that when there is a pause,something happens. Even when we are stunned by news we feel an impulse to make sense of it, to journey round or through the information we have just been given as if it was some kind of material terrain like a maze or jungle or barbed wire. There is an ocean of energy swirling around us and between people. That is often how it feels anyway, and if we want an audience to feel the full potency of that, we need to believe it.

So we started to explore this movement of energy in our bodies, to explore the nature of a pause and stillness. At first I asked everyone to stand still and asked them to consider what happens. Do you listen to the birds? the rain? Do you zone out your eyes? Do you close your eyes. Do you start thinking? What about? what happens.

I suggested people might move if  they wanted to. What happens? They change the atmosphere by moving don’t they? You want to move too, yes? Or if you want to stay still you need to somehow increase your efforts to somehow block out the moving person.

I suggested they walk slowly then Stop; walk fast, then stop. Then I asked them to sense the nature of these pauses and how did they change when you changed the tempo of the outer activity? Then I asked them to try stopping and then deciding to change direction. Changing the direction of energy gave us surprising feelings.

I asked them to explore making an action and just stop doing what they were doing and then continue. THE QUALITY OF THE ENERGY CHANGES OF ITSELF You cannot go on as you did before .You cannot keep it the same. Your whole being demands difference.

With exercises like this we listened to our bodies; radiating and receiving; opening and closing.We found that a pause was an ending or a new beginning. When you listened to your body this all became abundantly clear. The invisible became something of palpable experience. Something we could perhaps talk about and change.

It reminded me of the nunnery scene in Shakespeare’s MEASURE FOR MEASURE when the debauched Lucio arrives at the nunnery to persuade Isabella to come and plead for her brother’s life. Here we are in this holy cloister when this man brings in his personal atmosphere of the brothel. It collides with this overpowering general atmosphere of the cloister. As the text goes on and he becomes more serious, there is a real palpability in the idea that it is the atmosphere of where he is that makes him be more serious. This possibility that personal atmosphere is a serious player in not just how a character does something but what they do is an interesting consideration of how characters and we as humans operate.

A fabulous weekend. Thanks to all. As someone said at the end of the weekend, ‘I found out that the pauses were at least as important as the words.’

My next Chekhov School is to be with Hugo Moss from Michael Chekhov Brasil. Registration is open. The title of the workshop is Giving Voice to the Imagination. May 23rd-26th. You can find more information on the Dublin Workshop page of this blog. or visit http://www.chekhovtrainingandperformanceireland.com

3 thoughts on “The rest is silence; poses and pauses”