THE MOMENT when you have finished working through the play for the first time and then run it all is a strange moment. It is the moment when you get a sense of how this play will work in this venue with this cast. Just by speaking it, by acting it out, however roughly, a moment sparks when you realise the magic of the play in a way you did not know before. This alchemy gives you glimmers not only of the ultimate performances but the journey that the play takes and how it might affect a potential audience .It tests your decisions on composition even when not fully realised by the cast (as yet) and the atmospheres and qualities on which you have agreed. It is a stage along the way, a moment of achievement. Whilst it is far from ready, I was inexpressibly moved by its power.

Of course that first run through also tells us what practically does not work; e.g. clunky blocking and how far you have as a group still to go but nonetheless a stage has been reached. It is also a crossroads. It is now time to consolidate and sharpen, but also judiciously discard. It means honing skills and making firmer decisions. This production of The Bacchae performed by students on the MA and BA programmes at NUI Galway in the version by David Greig requires great voice and movement work, singing, character, a strong sense of ensemble ,the ability to play with the audience, fearlessly explore vicious humour, ecstatic joy and the grimmest tragedy as the play descends into hellish and human despair.

On that note, along with getting a full sense of the humour of David Greig’s version of the play when we acted it out this evening, I also got a stronger sense of the tragic trajectory as the remaining  human characters, Agave and her father Kadmos, realise their folly and are left to deal with the consequences. It is extraordinary to me that two characters we have hardly seen in the earlier part of the play are able to carry the weight of this tragedy, and yet somehow they do not seem like some kind of tagged-on thing; they are most definitely ‘part of the whole’. They speak for each of us who has suffered tragedy; who understand the nature of endurance.

The clarity of this is something I would put down in part to our work on M. Chekhov’s ‘feeling of the whole’ in our first few days of work. Composition is an extraordinary thing and even though we do not refer to it too much in rehearsal, I feel by getting people to get the story into their bodies a sense of the composition settles there within us all.

You cannot get a full sense of a play’s journey simply by reading . As Oliver Taplin says in his book Greek Fire, the Greeks make you face up to aspects of cruelty and cataclysm to an unbearable degree but within a ritualised structure which makes it bearable – just. Because it is poetic it enables us to face it unflinchingly. That is why Agave and Kadmos’ scene does not feel at all tagged-on. Because it is where the play is going.

The Bacchae by Euripides in a version by David Greig, is being performed at the Mick Lally Theatre from Feb 14th-Feb 18th by students of the NUIG Drama Programme directed by Max Hafler

In The Empty Space, Peter Brook describes directing as ‘having a hunch’ . Yet how many directors consider their work to make a concept and fit the actors within it, usually within a set and costume design already decided upon? This destroys the creative voice of the actor as artist and reduces them to a performing animal. As an actor once myself I remember trying to get my undisclosed feelings and ideas for the character ‘under the radar’ of a director, visible to me if no one else. All too often, the success of the actor is measured and perceived solely in how much he can encapsulate the director’s vision, very often a vision which is borne from someone who never stepped upon a stage at all. We, as audience, often blame the actor or the playwright for the disjointedness we feel when we watch such a piece when very often it is the director who is primarily responsible for this sense of ‘un ease’. Whîlst the director is the conductor, he is essentially part of an organic team. I feel this organic work has to happen from the start and talking needs to be limited in order that everyone can experience in their body and imagination what the play is about. 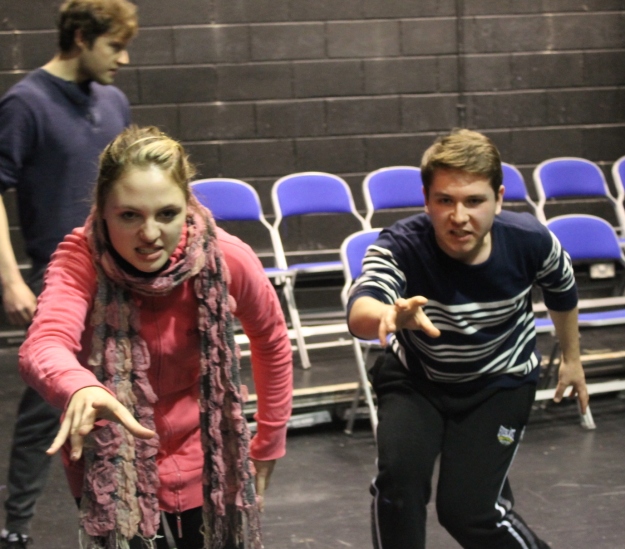 I walked into my preparation week with student actors for our production of David Greig’s version of Euripides Bacchae with some preparation done but I knew that the evolving work within that four day process would be totally transformative. I felt I was more open actually than I have ever been before. Of course my openness did not mean that I had no preparation done myself, I had done a phenomenal amount of work, but very very few decisions, including practical ones had been made. Hunches was what there was along with one version of a song, and a strong belief in my cast. I think this faith in the group is one of the key things I have learned in directing students in particular, though it’s something you need at whatever level you are directing. Trust however requires a lot of experience and a lot of faith. It also requires an acknowledgement that parts of your concept as it grows and accommodates the group will evolve, change and develop.

Michael Chekhov composition work to find a shape to the work is particularly fascinating when you are dealing with a play which though structured, appears to have a complex narrative of dovetailing stories interspersed with songs and chants which in a way appear at first glance to bear little relation to reality as we understand it… Dionysos allows himself to be captured and humiliated, rather like Christ, even though he has the power to destroy them all. The play shows two polarised way of being and living with catastrophic and brutal results. It begs you to take sides in the debate.. Whose side are we on ultimately? How do we want the audience to feel? How do we begin with the city of Thebes? What does it represent for us now? is it a sad place, a happy place, a place of order and harmony or rigid obedience? The play pits the imagination, and wild creativity against the colder intellect, very much a Michael Chekhov theme. As if by magic, after our tableaux work, the story appeared to have a much more obvious simplicity than it at first appeared. It’s far from set though we can see the options. When I directed Caucasian Chalk Circle last year we made I think, four endings and did not decide on the final one until almost the end.

One of the aspects of M. Chekhov’s work I love the most is his insistence on the responsibility of the artist to open up issues for us and our audiences and for plays to have something important to say to us NOW. The answers The Bacchae presents, if it presents any at all, are visceral relevant and real, if we remember that despite the fact that climate change is a reality and Nature is becoming wilder and more unpredictable, one of the principal leaders in the Western World is a denier of that reality. This is not the only level on which you can see this play but it is one of them. Because it is primarily a dramatic poem, it has a multiplicity of levels on which it can be seen. that is what makes it both fascinating and tricky, because you don’t want to prevent that multiplicity by being too literal with one overriding interpretation.
In addition to the strengths of the group I was also aware of limitations in time and training. We did a lot of training in these first days but I was concerned about the question of mask work, which, besides requiring thorough and precise choreography required complete feeling within the body at every single moment . At any time when that expression of the body was absent the performer simply disappeared. But the masks which are only to be worn by the Chorus, besides being quintessentially part of the Greek Theatre Experience enabled a number of things; firstly they clarified character; second they enable men as well as women to play the Bacchae; thirdly they take us away from the idea that these are a gang of women who are out on a hen night but show them as wild female forces of nature. That can only be a plus.

looking so forward to continuing the work next week.

The Bacchae by David Greig after Euripides will be performed by students of The Centre for Drama Theatre and Performance in conjunction with Chekhov Training and Performance Ireland  at the Mick Lally theatre  in Druid Lane Galway Ireland from Feb 14th – 18th.