What a fascinating exploration and discovery is The Sacrificial Wind, this small hard diamond of a piece by Lorna Shaughnessy,  which I directed at the New Theatre Space at the National University of Ireland Galway, which is shortly to be revived for the Cuirt International Festival of literature 2017 and playing in the Town Hall Studio Galway from the 25th-28th April .Tickets available at http://www.cuirt.ie or http://www.tht.ie

It is an absolutely thrilling piece to revisit.

Like all Greek theatre, Lorna Shaughnessy’s examination of the characters around the story of Iphigenia in Aulis asks big questions; in this case about our sense of helplessness in the wake of war and cruelty, our collusion in those events and our sense of shame in that collusion. It asks what can artists do to affect these horrors? What have we to offer? It takes us through a panoply of heroes, soldiers and victims and all in fifty minutes and with three performers. Interestingly one of the rules of the Ancient Greek Tragic competitions was that there were only three actors who played all the speaking roles.

What’s interesting about working with a set of poems as opposed to a play, even when the poems are dramatic,  is that the structure is more subtle like music and we have to understand that. Each poem is like an aria , changing the energy and movement of the piece suddenly for two or three minutes before a new character twists the story, often violently, in another direction. This is incredibly challenging for both actors and director as each poem exudes its  own particular atmosphere. A number of the poems, like the final set where the family and the playwright Euripides are all devastated by the sacrifice of Iphigenia, work together as a distinct musical movement.

So unlike a conventional play where the structure of the story limits the choices to a certain extent, a body of poems has a much more serpentine structure with many more possibilities. It means you could go on and on and on exploring but we had a short time frame. The poems gradually revealed themselves . We had not only to consider character but, like a song, a style of delivery which depended on how each poem was written. this work was greatly enhanced by the soundscapes of Aranos, and lighting by Bryan Rabbitte. 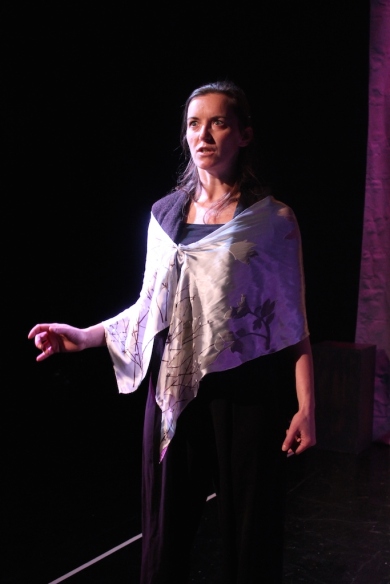 One thing I ditched very early on was the idea that any of the pieces would take place as ‘scenes’. The characters addressed only the audience. This did not mean that the other performers did not support the main actor but the principal acting partner was always the audience. This kept both a feel of Greek drama and a palpable collusion in the audience as to the Sacrifice and other decisions that the characters made. It was very direct.

This is not the same as doing a monologue to the audience, much beloved device of many modern playwrights, but a more Shakespearean take where the audience are asked to consider their role in the actions of the play . Shakespeare monologues are less reflective and more active. they are asking questions. Look at the ‘It must be by his death’ Brutus soliloquy  in Julius Caesar for one of many  examples . I was very aware of how our crisis – riven world is provoking the very kind of questions the characters ask.

Thanks also to Catherine Denning, Michael Irwin and Orla Tubridy , the actors, who made such an incredible job of the work.