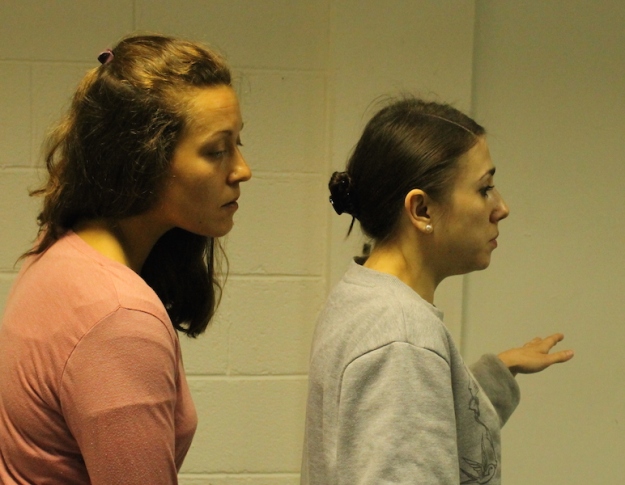 This was the first workshop in my new project, Chekhov Training and Performance Ireland and my first real experience of applying Chekhov Technique to the process of devising theatre completely from scratch.  I have used the technique with circus performers (see an earlier blog post) in leading and facilitating ensemble, as a tool for physical theatre, as well as working with actors on regular plays , but this was the first time connecting  the technique with the absolute core of our creativity – devising from nothing.

Yet isn’t that what Chekhov and his technique asks us to do? To just open ourselves to the creative spirit and allow a character to walk into the room from the mists of the imagination, to introduce itself, and inhabit our frame, without the structure or proscribed world of the text? It was both exciting and daunting to ask the participants to come with no lines learned, no books read, nothing.

Devising is a very very personal process with as many approaches and seeds of creativity as there are people on the planet. I felt this issue of the ‘seed point’ of where we start was absolutely crucial for our work this weekend. So I did not want to bring in a theme from which we would begin nor did I want to impose any kind of mythic structure, like looking at a folk tale or myth, something which Chekhov himself used as an exploratory tool, because in this instance I felt that that too might be an imposition. what i was trying to get my group to connect with was this absolute root or seed point of creativity.

So we began with body sensitising; qualities, ideal centre and radiating/receiving before moving on to creating body-statues which led on to spontaneous sketches of characters. Each participant made three sketches of characters with their bodies and then was asked to choose one. Further imaginary body  and inner life work followed, and gradually characters began to emerge and fill the room.Tiny scripts began. we also worked, through gesture, that they find a polarity of the character’s energy, an open warm gesture say, which closed to a hurt closed gesture and the actors started to get a sense of a force within the character.

I decided that within the weekend we would also look at general atmosphere so we could put our character into an environment. After some initial imaginative and atmospheric exercises we tried putting the characters into two atmospheres and it was heartening to hear people say things like “I never thought she would behave that way.”

What was quite daunting to me at the start of my own Chekhov exploration was the massive palette of choices working this way can produce. When you don’t even have a script to hold you down and you realise that you as the creator are also completely steering the ship it is quite a prospect. In this process you are on your own -it’s you and your creativity. Being creative requires a curious mixture of strong will power and an extraordinary openness, of freedom and discipline. For me the Chekhov Technique really offers that freedom.

Our next weekend (13th – 15th May ) here in Galway will be looking at the Chekhov technique with regard to directing  and acting and working with a yet to be decided text. you need to have some Chekhov knowledge.contact chekhovtrainperformireland@gmail.com or phone 086 330 7325