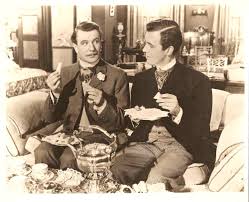 I first met Wildes ‘Importance of Being Earnest’ as a film, the famous 1952 one with Michael Redgrave and Edith Evans. It set the seal on the way to do this play for decades. When I had occasion as an acting student to work on scenes, the lightness and precision and wit were the only elements constantly highlighted by my teachers. They emphasised a kind of stiffness and artificiality. [this was all long ago]. And of course that stiffness and artifice is most certainly there but how does this stiffness and artifice make us feel when we play Jack or Algernon or Cecily or Gwendolen? Are these people as trivial and foolish as they appear?

I am very cogniscent of a kind of looseness that has developed in the playing of this kind of play [ especially when transferred to film] in an attempt to modernise them and make us see these characters as more recognisable people, but actually that does not really help us explore the world of a play like Earnest. Equally, it does not help us to dismiss the language as a style without substance or purpose, though stylish it most certainly is.

Joe Orton the subversive English 60s playwright modelled much of his work on Wilde, and he saw something in Wilde’s plays, which I was not clever enough to see at the time; the thematic grandeur of his work which Orton particularly emulated in What The Butler Saw. But if Earnest is a ferocious send up of the times, then what exactly could it be a send up of? This subversion, presuming it is there, does not reveal itself with cross gender casting necessarily, as fun as that might be, but through something more subtle.

Through using two of the Michael Chekhov tools of exploration , atmospheres and centres, I would like us in the weekend workshop I am running in late June in Galway, to possibly explore how that play might manifest to us now. Is it more than a shiny jewel box of a play? One of the interesting things about working with the Chekhov Technique, it seems to me, is that any production really grows organically from one’s imaginative response to the play. It enables you to be a bit more ‘out there’ , in a much more grounded way. What I mean is, you don’t just suddenly say ‘let’s do this in modern dress’ or ‘ here is an appropriate political world to put this play into.’ But you explore something deep within the play to explore the needs and insecurities of the characters within the atmosphere and society in which they live. That contrast between the characters’ needs and insecurities and the prevailing atmosphere of their environment is where the humour might lie as much as with the language.

The atmosphere of the world constrains and presses down on everyone. It has a kind of Alice in Wonderland kind of feel, dangerous and disturbing, with a bubbling anarchy under the surface of all the apparent frivolity. The centres of the characters might well be very contrasting to that atmosphere, soft and desperate, quivering or searching , looking for a way out. I don’t know – it is very exciting to consider.

The last three plays I have directed have been through the Chekhov technique with cast and crew  which has provided myself and my casts with original and deep explorations of the plays we have explored. I am looking forward to playing with the play in this weekend and perhaps a possible production next year.